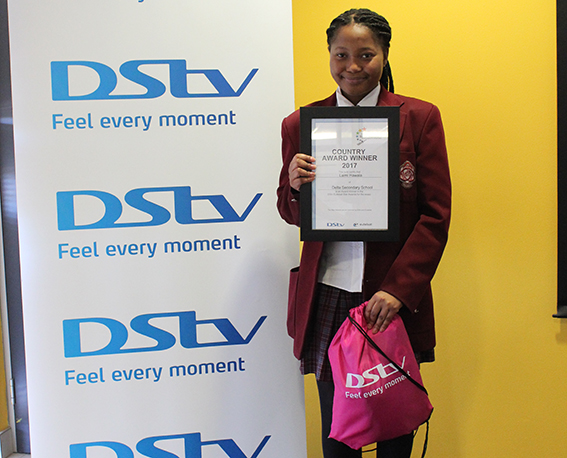 Laimi Hawala of Delta Secondary School, has been named as MultiChoice Namibia’s in-country winner of the DStv Eutelsat Star Awards competition for 2017. The award forms part of our efforts in promoting science and technology amongst school children aged 14 - 18 across Namibia. After a two day adjudication process the winners were announced with Laimi taking first place in the essay category while Rodney Skrywer from the SOS Children’s Village featured as the runner-up in the same category.


The DStv Eutelsat Star Awards, is a partnership between Eutelsat and MultiChoice Africa, aim to stimulate interest in science and technology as well as inspire innovative thinking amongst secondary and high school students across the continent. More so the awards take the form of a competition open to 14-19 year-old students in 42 countries. Students are invited to write an essay or design a poster depicting how innovative use of satellite technology in the fields of communication, earth observation or navigation can propel Africa into the future.


For this edition, students from secondary and combined schools were asked to write a creative essay or design a poster based on the topic: “It’s sixty years since the first satellite, Sputnik, was launched, broadcasting a unique and easily captured ‘beep, beep, beep’ signal. Looking back at this historic moment, write an essay or design a poster depicting how satellites have launched humankind into the 21st Century and acted as a unifier.” .

MultiChoice Namibia would like to thank all the students who participated this year as well as encourage other Namibian students to enter next year’s DStv Eutelsat Star Awards competition.


Founded in 1977, Eutelsat Communications is one of the world's leading satellite operators. With a global fleet of satellites and associated ground infrastructure, Eutelsat enables clients across Video, Data, Government, Fixed and Mobile Broadband markets to communicate effectively to their customers, irrespective of their location. Over 6,700 television channels operated by leading media groups are broadcast by Eutelsat to one billion viewers equipped for DTH reception or connected to terrestrial networks. Headquartered in Paris, with offices and teleports around the globe, Eutelsat assembles 1,000 men and women from 32 countries who are dedicated to delivering the highest quality of service.


About MultiChoice Africa
MultiChoice Africa Limited (“MultiChoice Africa”) is an African pioneer of pay TV services in sub-Sahara Africa, having launched the first digital satellite service in the 1980s. MultiChoice Africa provides multi-channel multi-platform digital pay television services containing channels from Africa, America, China, India, Asia and Europe. The company has over twenty years’ experience as a Pay TV operator in Africa, offering cutting-edge digital technology and a selection of DStv and GOtv bouquets containing premium television channels for subscribers in 49 African countries and the adjacent Indian Ocean islands. MultiChoice Africa provides its digital satellite television service – DStv - to subscribers’ homes from two different satellites, namely: the Intelsat 20 (“IS 20”) Ku BAND and Eutelsat 36B (used to be called W7) Ku Band. The GOtv offering is on a DTT (DVB-T2) network which was established in 2011 and currently covers eight countries. This low cost mass market offering provides great family entertainment at a price everyone can afford.